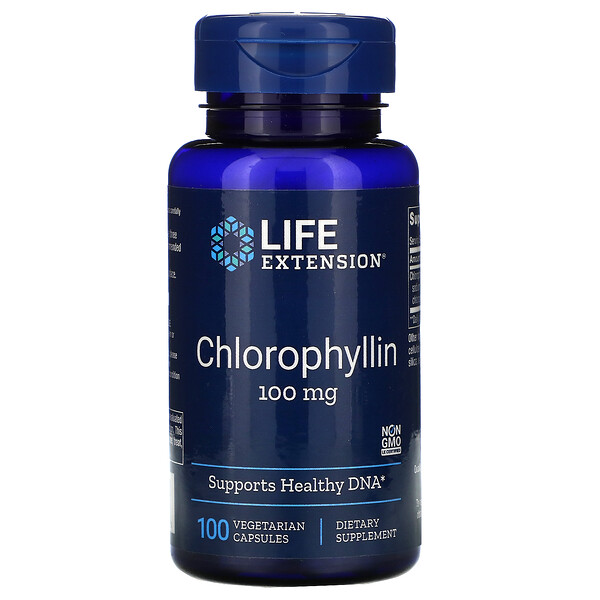 Derived from chlorophyll, a green pigment found in plants, Chlorophyllin helps support and maintain DNA health with its DNA-protective and antioxidant properties, inhibiting the effects of free radicals and environmental toxins.

We are exposed to harmful substances and environmental toxins every day. Beyond cigarette smoke and diesel particles, even foods exposed to high temperatures, like fried foods, burgers and bacon, can have an undesirable effect.

Chlorophyllin is a compound derived from a green pigment found in plants known as chlorophyll. Research has shown that chlorophyllin has protective, antioxidant properties, helping your body support against the effects of harmful chemicals on pieces of your DNA.

It has been estimated that the DNA in each cell of the body experiences tens of thousands of oxidative hits per day. But human studies show lifestyle, nutrition and other environmental factors can have a positive impact on oxidative stress and may help support longevity.

Processed foods and those cooked at high temperatures promote undesirable cellular function. Deep-fried foods, along with well-done beef, steak, hamburgers, bacon and even lean meats and fish can encourage the formation of gene-mutating heterocyclic amines. Plant foods like grains, nuts, olives and potatoes can form other DNA compounds during processing.

Chlorophyllin is made from chlorophyll, a green pigment found in plants. It has been shown to have DNA-protective and antioxidant properties, helping inhibit the bonding of chemicals to pieces of DNA. Chlorophyllin also quenches major oxygen-free-radical species and acts to support mitochondrial health.

Take one (1) capsule three times daily with food, or as recommended by a healthcare practitioner.