Why Spices Can Help with Inflammation 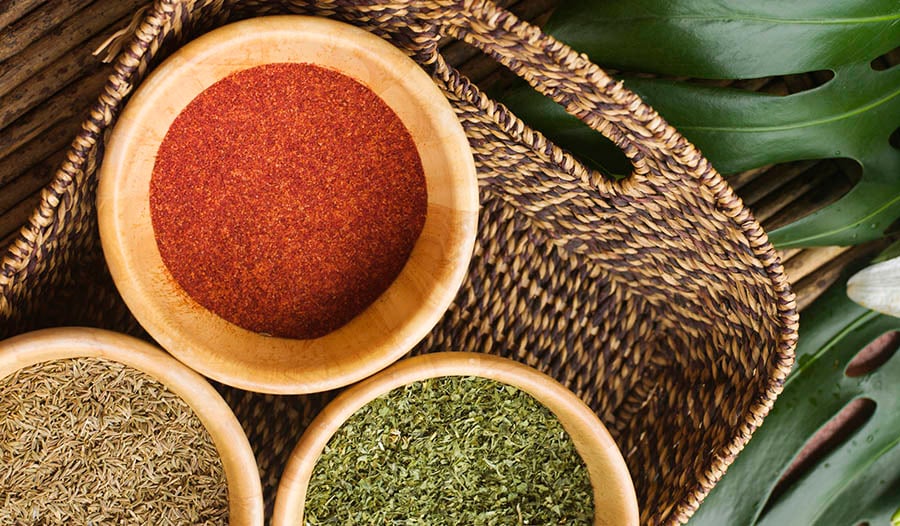 Spices can do more than just add flavor to a dish: They can be powerful tools to reduce inflammation in the body. These five spices are superstars at potentially lowering the body's inflammatory markers and promoting the formulation of proteins that fight swelling. With new products appearing on the market every year with lots of hype promising to reduce inflammation, it's great to know that these simple kitchen staples have been used for centuries around the world to combat inflammation.

Cinnamon is a spice that works well in both sweet and savory dishes, and it can be a powerful tool to reduce inflammation. It is high in antioxidants, which fight free radicals that damage the cells, and these antioxidant properties may be what results in cinnamon's ability to reduce inflammation. Cinnamon may also promote healthy blood flow to inflamed areas, which can encourage the body to heal the swollen area more quickly.

Cinnamon is known for its ability to have a positive impact on blood sugars, and it may help to decrease fasting blood sugar levels. This can be a helpful tool for people who have been diagnosed with diabetes, pre-diabetes or a strong family history of the disease. Additionally, consumption of cinnamon may lower blood pressure and LDL, or "bad" cholesterol, levels.

Cinnamon has a naturally sweet flavor, and it's the perfect choice to add to yogurt, whole-wheat toast or cereal. It complements bold flavors well, and it makes a nice addition to soups or chili. A bit of cinnamon can also make a great latte.

For additional cinnamon flavor and health benefits, consider adding a dash of cinnamon to the coffee grounds while brewing.

Rosemary is rich in the chemical compound carnosol, which may reduce inflammation and might even prevent cancer. It's a fragrant herb in the mint family, and its use dates back for thousands of years to ancient Hebrew, Greek and Roman diets.

In addition to potentially decreasing inflammation in the body, rosemary may improve memory and overall nervous system function. It may also play a role in balancing sex hormones, and it can lower cortisol, one of the body's main stress hormones. When used as a marinade for grilled meat, it can lower potential carcinogen exposure by up to 70 percent.

Rosemary, in both fresh and dried forms, can make a delicious, health-boosting marinade for grilled meat.

Turmeric is a potential powerhouse for fighting inflammation. It's well-known in Indian and Caribbean cuisine, and it adds a lovely flavor and vibrant yellow hue to dishes. Many curry powders contain a good amount of turmeric.

Turmeric may greatly improve the aches and pains of arthritis with frequent use. It's also been noted to improve blood sugar control and insulin resistance, lower LDL cholesterol, possibly prevent some types of cancer, and improve memory and mood. It may also help the liver to detoxify pollutants, and its positive impact on bile can support weight loss efforts.

In addition to curry dishes or spicy soups, turmeric can be a great anti-inflammatory addition to smoothies.

Cumin is commonly found in bean-based dishes throughout Latin America, Africa and Asia. This savory spice packs a powerful antioxidant punch, and it's often found in curry powders. It plays a starring role in chili seasoning, taco recipes, stews and veggie dishes.

Cumin offers a wide variety of health benefits in addition to its anti-inflammatory properties. It may help to improve cholesterol levels and balance blood sugar levels. It can help to shed excess fat, especially abdominal adiposity, or belly fat. It may even decrease the risk of developing certain types of cancer. In some Middle Eastern cultures, cumin is considered an aphrodisiac when mixed with honey and pepper. Cumin may also improve the appearance of skin and treat boils or rashes thanks to its high amounts of vitamin E and antimicrobial properties. It's also rich in iron, which can help to reduce the symptoms of certain types of anemia.

Cumin can be simple to add to daily meals. Consider adding red beans or kidney beans to a salad, and sprinkle a dash of cumin on top. Add a bit of cumin to scrambled eggs and top with organic salsa. For an easy, flavor-packed cumin recipe, try this quinoa and black bean chili recipe.

Cilantro is a versatile, leafy green spice that offers great health benefits and flavors. Cilantro pairs well with many Latin American and Asian dishes, and it's best added towards the end of the cooking process to retain its unique flavor and healthy properties. It works best with savory dishes to add a delicious kick to meals.

This little green herb works hard to reduce inflammation and lower blood sugar levels. Cilantro is packed with phytonutrients and antioxidants, and it is especially high in quercetin, a flavonoid that is great for fighting inflammation. It may also ward off certain forms of cancer, and it can decrease levels of bad cholesterol. In addition, cilantro may have antibacterial properties, and it can be particularly effective against the bacteria salmonella, a common cause of foodborne illnesses. It may also be helpful for fighting viruses like the common cold.

Cilantro, fresh or dried, makes a great addition to the top of many savory dishes. The dried version can be sprinkled on top of rice dishes for an extra burst of flavor, or fresh cilantro may be cut finely and added to a salad. This cilantro-based avocado salsa recipe is filled with the flavors and nutrients of cilantro and can be adapted for fresh or dried herbs.

The five spices listed above can be powerful weapons to fight systemic inflammation. These recipes and tips can provide the pathway to getting more anti-inflammatory goodness into the daily diet. They may also offer additional benefits, such as better control over blood sugars and improved cholesterol levels. Try these spice superstars today for a tasty way to improve overall health.

3 Natural Ways To Fight Inflammation in the Body Every Day

Most chronic illness is either caused by or made worse by inflammation. These foods, lifestyle changes, and supplements can help you fight it every day.

Natural approaches to whole body inflammation Inflammation occurs as a reaction to injury or infection. It’s characterized by pain, redness, swelling, and sometimes loss of function.